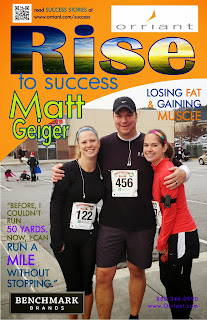 “It’s like a cloud over your head, almost a level of depression,” recalls Matt Geiger. At least, that is how he used to feel before exercising on a regular basis. “I don’t have stress looming over my head from not working out. Now that I am exercising, I don’t feel guilty anymore.”  When Matt’s employer, Benchmark Brands, implemented Orriant’s Corporate Wellness Program he thought it “seemed silly at first”.  During his initial Orriant Health Assessment℠, he discovered he weighed a little more than he expected. Shortly after, he quickly gained an additional 10 pounds during the Christmas holiday season. Matt realized if he was going to change, he needed to start now.

“Since January, my weight is down 23 pounds,” said Matt with a grin. “It’s not just about dropping weight; it’s about toning your body. I’ve put on muscle and my clothes are fitting better. I’m happy and my wife is happy.” Matt is the father of 4 children and is far more active with them today than he was a year ago. “I’m playing with my kids a lot more and I’m feeling better about myself.”

Not long ago, Matt switched job locations which cut down on his daily commute time.  “I thought, ‘I have no excuse anymore. Let’s see what happens.’” Matt decided to dedicate 60 minutes a day to exercise, 2/3 of the time he gained back from his shortened commute. “Exercising in the mornings means I get the blood going and I’m wide awake when I get to work. I’m happier at work and I’m healthier,” says Matt, “It’s made a real positive impact.”

Calling his Orriant Health Coach℠ seemed like a silly thing at first too, but “ultimately, it’s been a good thing for me. I hold myself accountable in the end.” Matt appreciates the one-on-one interaction he has with his coach, Rachel. “I feel like she has a genuine concern for my progress. Rachel gives me ideas, tips and tricks. It is encouraging.” One such tip was inspired by Matt’s nightly routine of watching TV after his kids are in bed. While Matt watched his favorite shows, he found himself mindlessly snacking on junk food. Rachel suggested he keep his hands preoccupied by using free weights instead of eating. “I grab those free weights and do curls, tricep extensions, whatever,” says Matt with a chuckle, “I look like a fool doing it, but it’s better than eating a bag of Cheetos!”

Matt has plans to hike different parts of the Appalachian Trail throughout the upcoming year.  His goal is to hike 10-20 miles on any given weekend.  To help make this goal a reality, he trained for and completed his first 5k. “Before, I couldn’t run 50 yards. Now, I can run a mile without stopping.”

Joining Orriant’s Corporate Wellness Program has made a lasting influence. “I’ve always been active, but I wasn’t doing it consciously. I was only doing the fun part, instead of making an effort to be healthy.” Matt continues, “Now, I actually enjoy kayaking instead of suffering through it. I am hiking and enjoying it again. I’m looking around at the scenery instead of sucking wind. Not only do I enjoy it, but I look forward to it.”
Posted by Unknown at 11:27 AM