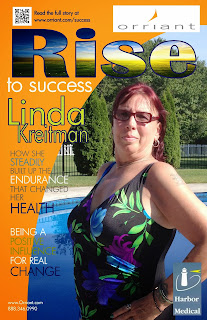 Linda used to exercise regularly until she was injured a few years ago. Her recovery was slow after her injury. One of her main goals when she began working with her Orriant Health CoachSM was to get to a point where she could exercise consistently the way she did before her injury. Linda started walking regularly and incorporated some light strength training at home. Shortly after, she traveled for work and found that her endurance had really improved in just a few short months. Linda took a lot of stairs when she traveled and she realized that they became easier and easier each time she used them. She was pleased that she wasn’t out of breath either. She was very thrilled to see her improvement with her endurance and stamina simply from increasing her exercise routine in just a few short months.

In the last year Linda walks everywhere, as much as she can and makes going to the gym a priority at least 2-3 times a week. She is trying to make her gym trips a habit in her weekly schedule. By incorporating her gym trips she feels her body is "in balance" and she’s able to try more fun things like bowling and hiking. In addition to her gym trips, she has been practicing portion control regularly and tries to be more conscious of how much she really needs to eat and not getting uncomfortably full. She has learned that she really does need less food.

Her biggest success is that she feels better in her clothes overall and feels in control of what she does. Linda eats to feel better for her and not for other people. Linda believes the biggest contributing factor is tracking everything - holding herself accountable to the goals she makes.

The girls she works with have started to make better choices after seeing Linda’s success with weight loss and with tracking her food. Her success has even rubbed off on her family. Her husband has been trying to cook healthier meals for both of them as well. Linda plans to stick with it and continue to track everything to get to her ultimate goal weight.
Posted by Unknown at 10:21 AM