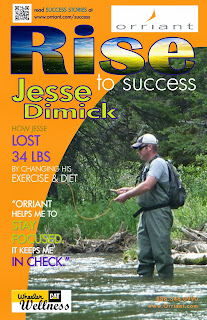 In only 4 short months, Jesse achieved all three goals he set with his Orriant Health Coach℠. Since July, Jesse 34, has met his desired weight (lost 34 pounds to do so), is exercising regularly, and lowered his blood pressure to within a very healthy range. The change began when Jesse switched jobs and started working for Wheeler Machinery, a partner with Orriant, a corporate wellness company. Before joining Wheeler’s team, Jesse often traveled 3-4 times a week. This schedule made it difficult for him to eat healthy – often eating on the road. “Since I’ve been working at Wheeler, I can go home every night and eat good food instead of fast food.”

Losing extra weight is something Jesse has wanted to do for about 5 years now. Orriant’s wellness program was just the thing to encourage him to not only make changes, but to stick with them. Jesse explains, “Setting the goals has been helpful. Before I eat something, I think about it. As far as my workouts go, Orriant helps me to stay focused. It keeps me in check.”

It is no surprise that exercise and proper nutrition are the secrets to Jesse’s wellness successes.  Even though he is physically active at work, he understands it is important for him to exercise outside of his job. Now that he is setting goals with his Orriant Health Coach℠, Jesse exercises 4 days a week. His workout routine usually consists of 20-30 minutes of running, followed by 10 minutes of light weight lifting. When asked if his new exercise program was an adjustment, Jesse responded with, “It wasn’t too bad.”

Jesse admits that working with his health coach, Nate, is an important key to his successes. “He has been great and really good in helping me set my goals.” Nate also helped Jesse separate myth from fact when it came to his metabolism. “Nate explained to me the importance of eating a little bit more to maintain my body weight and the process behind it all. That has really helped me out.”

Nate describes Jesse as a ‘great guy’ and ‘a very hard working individual’. “The most substantial change I have seen in Jesse is his mindset,” says Orriant Health Coach℠ Nate. “He is always looking to succeed and is never afraid of failure.” Jesse acknowledges that taking the time to focus on his health has given him more than just physical benefits. “My days go by easier than they did before,” says Jesse with confidence, “It makes you feel better about yourself.”


Jesse is grateful for the experience to work with his health coach and wellness company.  “Orriant has provided some great accountability and awareness in my life. By doing so, it has enabled me to accomplish my wellness goals. It feels great and I want to continue my progress.” Jesse’s current goals are to maintain his overall physique and fitness level. Specifically, he is looking forward to increasing his muscle mass. Nate is confident Jesse will surpass these new goals, just like he initially did, only a few short months ago.
Posted by Unknown at 9:12 AM